c.  This next group, then immediately expresses its new updated character, in turn, as a pattern of impulses, to the next linked neuron group(s,) which does the same.

In other words, patterns of impulses jump from group to group … forming a trail of updated energized neuron groups in the circuitry.

e. When incoming patterns from different sources form impulse trails that go on to energize the same pattern of neurons in the same group, further in the circuitry, this pattern of reinforced neurons forms a resolution.

Since the energy from more than one source energizes a resolution pattern, this reinforced resolution pattern generates a stronger, more intense impulse trail – maintaining self-sustained activity in the system.

So impulse trails are sustained by the absorption and convergence of energy in the system’s circuitry.

f. When sensory groups are constantly monitoring energy states from the periphery and when these trails are constantly generated to more central groups–where these simultaneous incoming trails are resolved–we can infer the general work of the system is: to monitor and resolve the simultaneous states the body is exposed to.By tracing impulse activity as it’s simultaneously absorbed from periphery and converges to central groups, we can infer that the system’s work is to monitor and resolve.

g. As energy simultaneously penetrates the system, a range of areas/ neuro-architectures each do unique work as they are energized.

h. In summary, as lightening-like impulse trails are constantly evolving, their monitoring and resolving work is done as impulse patterns are generated throughout the system.

~ what we get from this step ~

The core concept of the impulsing model gives us an understanding of how to trace energy in this system — in a new simplified way — by showing how trails evolve and and are sustained by the absorption and convergence of impulse patterns. This efficient activity gives us insight into how the system works well. 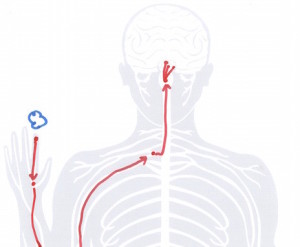